Text is temporary placeholder with text directly from the deliverable D1.1. To be replaced by text specifically written for this page.

ISO 31000 defines risk as the ‘effect of uncertainty on objectives’ (ISO/IEC 31000: 2009). An ‘effect’ is a positive and/or negative deviation from what is expected, whilst ‘objectives’ may be different aspects or goals.

Furthermore, risk is characterised with reference to potential events and consequences, and can be expressed in terms of a combination of the consequences of an event and the associated likelihood of occurrence. Likelihood is the ‘chance of something happening’ and can be measured qualitatively or quantitatively (ISO/IEC 31000: 2009). In general terms, likelihood can be used interchangeably with probability. That said, probability more precisely refers to a quantifiable measurement where ‘measure of the chance of occurrence [can be] expressed as a number between 0 and 1, where 0 is impossibility and 1 is absolute certainty’ (ISO/IEC 31000: 2009).

This definition, albeit broad, results in a classic risk calculation whereby risk is a multiplication of the probability of an event with the consequences of an event (1):

However, in the case of many natural hazards, the variables are not independent of one another insofar as likelihood of occurrence is affected by the size of the impact (European Commission 2010: 16). That is, it is not the presence of a hazard that indicates the risk, rather, climate change only becomes a risk when a system is exposed and vulnerable; thus, ‘risk is also a function of the underlying environmental and socioeconomic context in which …. climate change occurs’ (Preston and Jones 2008: 272). For these reasons, the notions of vulnerability and exposure can be introduced to capture these nuances – since the probability of an impact occurring may be affected by enacting vulnerability reduction measures.

Therefore, as reflected in the IPCC AR5 approach, there is a functional relationship between the
elements of risk, which are broken down to reflect the hazard, exposure, and vulnerability (2).

Figure 2 provides an illustration of the relationship between Equations 1 and 2. 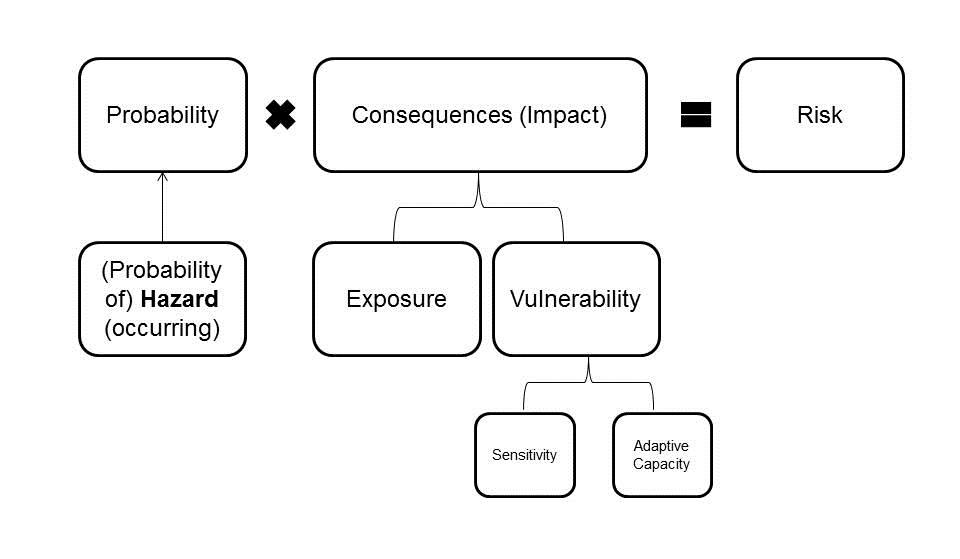 Data on the IPCC’s risk elements (hazard, exposure, vulnerability) can be useful separately; for
example, in communicating hazard probabilities and informing measures to reduce vulnerability to hazards. The ability to deconstruct different risk elements offers additional insights to decision makers when planning adaptation responses, by identifying which issues are driving risk in a particular situation. But, it is when these elements are brought together within a risk assessment they become more powerful. This is particularly the case where supporting spatial data is available, as the elements of weather and climate risk vary according to location (Tapia et al. 2015).

Several issues are introduced below which emphasise why climate change risk assessment can be viewed as a valuable aspect of adapting and building resilience to climate change. These are:

Risk sits at the centre of frameworks designed to support climate change adaptation and resilience planning and action, including those produced by IPCC (IPCC 2014a) and the Urban Climate Change Research Network (Rozenzweig et al. 2011). In some cases, assessing climate risk is a statutory requirement. For example, the UK’s Climate Act of 2008 mandated the publication of the UK Climate Change Risk Assessment (HM Government [UK] 2012), to be updated every five years. It also obliges over 100 UK organisations, particularly critical infrastructure providers, to report on climate risks and detail their proposed adaptation responses to these risks.Further, a number of existing adaptation planning processes incorporate a risk assessment stage. Examples include:

Risk assessment is a process that is focused on supporting decision-making. Brown and Wilby (2012) describe analysing climate risk as a matter of ‘due diligence’, which can be interpreted as taking a reasonable level of care before taking a decision. King et al. (2015: 16) note that a risk is, ‘…something bad that might happen’, and that a risk assessment asks ‘What might happen? How bad would that be? And, how likely is that?’ Answering these questions informs decisions on how to respond to identified risks. This, as Dickson et al. (2012: 23) suggest, ties risk assessment closely to decision making; ‘… [risk] assessments aim to simplify complicated experiences of risk in order to assist in decision making.’
From the perspective of adaptation and resilience, climate change risk assessments can offer decision support in a number of ways, including:

The benefits of undertaking a risk assessment can also be observed in the outcomes of decisions
informed by a risk-based approach, particularly where spatial risk data is available. Here, developing responses to minimise losses and negative impacts associated with climate change is key. As noted by Dickson et al. (2012: 16), ‘If no steps are taken to identify and manage disaster risks and climate change, the resulting losses can be irreversible and have severe implications on the safety, quality of life, and economic performance of cities.’ Further, risk assessment can also reinforce the importance of climate change mitigation to reduce the frequency and severity of future hazards.

It is also notable that the networks developed during the process of undertaking the risk assessment, and the information obtained and learning gained, can provide an important resource for cities. Further, risk assessment outcomes may help to generate political commitment for taking action. Both aspects – assessing risk and creating awareness – are features of RESIN’s Work Package 6 that investigates and develops decision support systems (See Wijnmalen et al. 2015).

Enabling climate change to be considered alongside other risks

Cities and urban areas face risks from a range of sources, one of which is extreme weather that might occur more often as a result of climate change. Other risks, generated by socio-economic and biophysical drivers of change, may have a greater or lesser influence on decisions than climate change. This judgement can be made if climate and non-climate risk information is available to be evaluated (Willows and Connell 2003). King et al (2015: 8) highlight the importance of such an evaluation, noting that; ‘The most important decision that any government has to make about climate change is one of priority: how much effort to expend on countering it, relative to the effort that must be spent on other issues.’

Risk sits at the nexus of the science-policy interface in the climate change adaptation and resilience world. Science-based assessments of risk feed into the policy arena, where a range of issues (including climate and non-climate risks) then compete to influence decisions. As a result, the identification of significant climate related risk may not stimulate action, even when the decision making process is driven by climate change. Decision makers may perceive addressing other issues and risks as a higher priority.